Whether you’re permanently poor or short term broke, it really sucks to be the only one of your friends in that position. On top of the day to day stress of not knowing if you can keep up with the rent, there’s the perpetual embarrassment of wearing last decades fashion, schlepping around in holey shoes and always bailing out of dinner plans because you can’t afford it. It feels like you’re constantly putting on a brave face while making excuses for your finances and you feel like you’re constantly being judged for your lack of cash.

There’s a way to live on less without embarrassment though. It’s called owning it.

It’s all about your outlook. 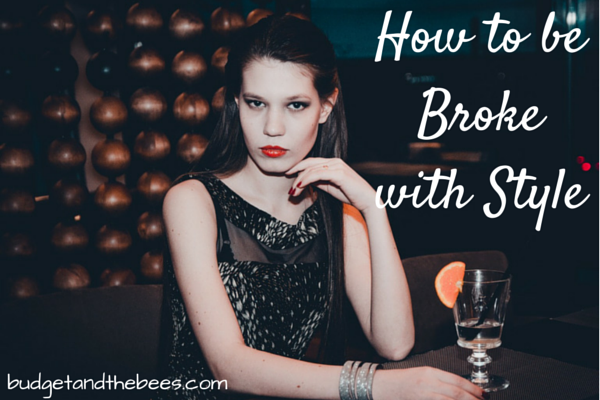 Thrift shopping is in. So is growing your own vegetables. Minimalism is cool and consumerism is so last century. With that in mind, what the hell is wrong with saving a few dollars where you can? Wear it, own it and do it with pride. People who have money are still shopping in bulk and looking for the best prices, it’s nothing to be ashamed of. Celebrities are wearing second hand clothes and putting their own stamp on it. The homesteading movement- in which costs are cut by using, reusing and DIY- is growing exponentially, so take a hold of it and ride the wave.

Instead of never talking about money, which is a habit many of us are in, start broaching the subject. Not in an “I’m poor” context, but about the things you’re doing to save money. If someone asks you where you got your dress, don’t mumble about not remembering- say “I got it at that awesome thrift shop in the city- you won’t find this in a department store!” Make it your thing, the thing you do because you love and are proud of it. Stop being beaten down by how you think people look at you- if you say it like it’s a good thing, they’ll believe it.

There are entire blogs and websites dedicated to crafty, cheap DIY homewares, fashions, food and life hacks, so follow them. There are tons of ways to save money including collecting coupon codes, like old navy codes canada. See that other people are making money-saving part of their identity. They’re not just doing it, they’re proud of it to steal a page from their book and do the same.

If you don’t already, start growing your own veggies. Tell people about the great co-op you’re in. Talk about reducing waste by buying less processed foods and recycled homewares. So many money saving techniques are also good for the environment, so remind yourself that there are reasons you’d do this even if you could afford to do otherwise. Then, it starts to become a choice, instead of something you’re forced into unwillingly.

No amount of DIY is going to offset dinner at a big expensive restaurant, but instead of just bailing out, how about you throw a dinner party instead? You can get heaps of inexpensive big batch meal recipes online and if you make it a ‘thing’, you and your friends can bring back the dinner party. Cooking for others can be a lot cheaper than dining out (just make sure the guests BYO) and you’re likely to be paid back in kind.

Other outings could consist of a Sunday picnic brunch, skating in the park, or staying on for a big batch cook up. Look up cheap or free attractions in your area and make a day of it. Go on a thrift shop bargain hunt. This way you’re spending time with your friends without having to rely on being shouted, or spending money you can’t afford. Your friends will really appreciate your efforts and you can start feeling pride in your low cost accomplishments.

If you have good friends that know your situation, or you have a family member who is able to do so, people will sometimes offer to pay for stuff. They might want to shout you dinner, or pay a bill or loan you some money. Of course, the decision to say yes or no is yours alone- but the choice to offer is theirs. Of course, sometimes stuff like that comes with strings attached, but if it’s a good and genuine offer, why not say yes? We’re indoctrinated to feel guilt for accepting financial aid but the reality is, the giver often gets more satisfaction than the recipient.

If a friend wants you to come out to dinner and offers to pay for you, it’s because they want you to be there, not some convoluted obligation spiral that has them wailing in anguish behind the scene. You’re not a leech if you occasionally accept. Remember that you have either probably been in that position or may be in the future- you just want a friend to come to dinner and it’s no hardship to pay. It’s not a big deal, really! Accept with grace and stop beating yourself up over it- just go, and have a great time. If you want to pay them back, do it with home baked cookies or craft, run some errands for them or invite them over to dinner at your house next time.

Are you going to stand up and be a part of the movement?