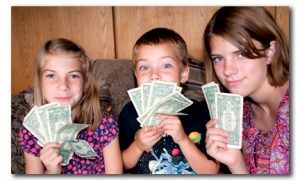 As a parent there are many things that have been bestowed unto you to teach your children. In many films and television shows these talks usually center around the opposite sex, the “birds and the bees” or the difference between right and wrong. Those talks transfer off the screen into real life as well. There is one thing that many parents aren’t talking about though (although they should be) and that is money. In fact more than half of the American population says that they are uncomfortable when “money” is brought up in conversation. Why?

The main reason behind not talking to kids about money, according to a separate national survey, is that many parents are not where they thought they would be financially and are embarrassed to talk about it with their kids. Ironically, although many families aren’t talking to their kids about money, 60 percent of American adults are most likely to turn to family members for advice rather than a financial professional. This means many people are taking advice from the same individuals who were too embarrassed to talk about money struggles when they were happening.

If you’re having trouble talking about finances with your kids, there are a few things you can try to help matters along:

Seriously. There’s a book out there about everything. Even if you can’t find a book to help guide you on how to talk to your kids about money, there’s a book that can explain different parts of the financial world to a child. Read it to them and help them understand money and the importance of creating a financially stable life.

A friend of mine has a shelf full of the “Books for Dummies.” She’s read all of them and I find it fascinating. She took the time to find a “Managing Your Money” for dummies and read up on it. Once she’d read the book, she decided she would write a smaller and more kid-friendly version of the book to read to her children. It worked fantastically.

Make it a Game

If you think teaching your kids about money would be easier if it was a game, you’re in luck. There are plenty of board games, like these, that can be used to teach your children the value of money.

My grandfather, for instance, used to play a card game with us. When one of us won we would get to pick either a $1 bill or a piece of candy. Of course, as kids, we rushed to pick the candy – at first. However, my grandfather sat down and explained to us that you could buy THREE pieces of candy with that one dollar. Better yet, if I chose to allow him to hold my dollar at “the bank” for a week until we saw one another again, I would get $5 (because I would get interest for being patient).

No matter how you decide to talk to your kids about money, you’ve got to scale it down (like my grandfather did). Even though money is a huge subject, you can find ways to make it smaller and help them understand. For instance, many parents give their children an allowance which is great. An allowance forces them to work (do chores, behave, etc.) for their money. If you want to go beyond making them work for their money, a great thing to do is identify something they would like to have (a toy, electronic, etc.). Once you’ve picked an item, explain to them how many weeks of chores it will take to save money for that item. It will teach them more about saving money as well as the value of the dollar.

Speaking of the value of the dollar, you’ve got to make the dollar mean something to them. In my example with my grandfather, he certainly did this. That dollar was worth THREE whole candies. However, you can also do this by vocalizing a savings plan with the entire family and putting a jar with the cash in it in the house. For example, if you are planning a trip to Disney World with the family, you will have to save a substantial amount of cash ($6,000+ for a family of four). Write on the jar “Disney World Savings” and talk to your children about how long it takes to save that money. It will help them understand the importance and the payoff of saving.