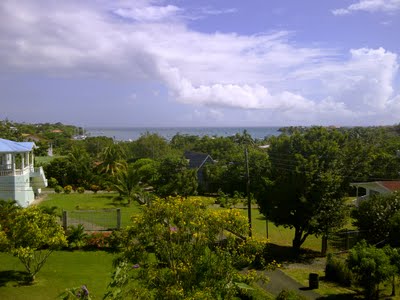 A few weeks ago I wrote about moving to Grenada, but I didn’t get to the actual moving part. I just explained why we moved to Grenada, what it was like when Hubs finally got accepted to medical school, and the preparations for him to leave.

The truth is, actually getting to Grenada was a HUGE problem for hubs. In fact, we flew back and forth to Grenada countless times over three years, but the first time hubs flew there (without me) was the absolute worst. experience. ever.

There was severe fog in Florida. Hubs flew from Virginia to Florida but couldn’t get out of Florida. He had to be in Grenada on a certain day for orientation, and as we would learn, certain airlines only fly to Grenada on certain days. If I re-booked him on the airline he was supposed to be on, he would miss orientation altogether. So, I booked him on an alternate flight. Instead of going straight to Grenada from Florida, I booked him on a flight to Trinidad first.

He landed in Trinidad at midnight and stayed in the airport with some other students. He was sitting next to another guy in the airport just chatting about school and who knows what. Both my husband and his new friend were on their laptops sitting side by side, when a young man ran up right to them, grabbed his friend’s laptop and took off with it.

Now my husband’s new friend was a huge guy not to be messed with, so his friend started chasing this kid through the airport. He tackles him and the computer goes flying. They get in a scuffle and the police showed up, and it was a huge mess. Meanwhile, my hubs is just sitting there in the airport surrounded by all of their bags not wanting to move, not wanting to get in trouble in a foreign country, but not exactly feeling comfortable either because he just met this guy who was also a student and that guy was now in a fight with the computer thief while hubs had all of their bags.

Somehow they got it all sorted out. Our friend’s laptop was shattered (and it’s a huge pain in the ass to get new laptops to Grenada). Our friend (well, he obviously later became our friend after that experience haha!) looked kind of rough after that mess!

Finally, they get to Grenada at 6 AM in the morning, and it’s pouring raining. Like, monsoon raining. Grenada had some of the most incredible thunder storms. No one from orientation is there to pick up hubs from the airport because they didn’t know he changed flights. Hubs calls me crying saying this was a massive mistake and tells me what happened in the Trini airport. He said he should have never gone to Grenada, he felt unsafe, and he wanted to come home.

Like the ultra supportive wife I am, I told him too bad and that there was no way he was coming home. We’d gone through too much to get him there. Poor guy. Somehow he found his way to campus. Everyone was asleep, and he didn’t know where his dorm was. A Dean of the school found him sitting on the steps in front of a school building totally drenched from the downpour, exhausted, and basically, a complete mess. The Dean got Hubs into his office, figured out where he was supposed to be, and then hubs was on his way.

A few weeks later, my husband was on the bus and he overheard two people talking about these guys who beat up a thief in the Trinidad airport. It made him sound like a hero and he just sat there and laughed since really he didn’t do anything except sit there and watch the bags.

Despite the crazy introduction to Grenada, Hubs found his way but he’ll never, ever forget those first few moments on the island. It’s hard to believe we spent 3 years there and now Hubs is just a few months away from applying to residency after such a long, long road (and a few monsoons later.)

What’s the craziest travel story you’ve ever had?